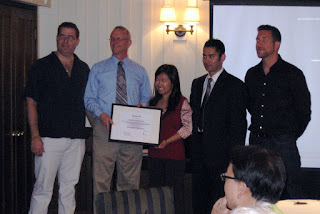 Building on last year’s award-winning “Dynamic Neck Brace” project in MECH 457 (2007-2008), the ALS Society of British Columbia increased its support for neck brace design projects this past academic year (2008-2009), as well as for other projects at UBC, SFU, UVic and BCIT that promote the well-being of persons with ALS. A total of 12 student projects were submitted this April for consideration of the Design Award, 4 from UBC.

The “Motorized ALS Neck Brace” project is recommended for its group’s achievement in support and mobility of the head, incorporating motorized assistance. The UBC Mechanical Engineering Team collaborated with an Emily Carr student on this impressively designed project, which the PALS Panel members actually trialed on themselves.