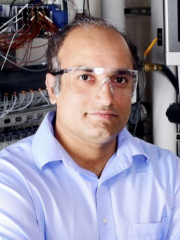 Abstract: Mixing is central to several important phenomena in nature and engineering. Rayleigh-Taylor (RT) and Richtmyer-Meshkov (RM) driven perturbations at the interface of materials lie at the heart of an overarching science for material mixing that stretches from oil trapping salt domes, that develop over tens of millions of years, to degradation of Inertial Confinement Fusion (ICF) capsule performance in 10 -12 s. RT and RM are insidious instabilities that start with exponential growth (power-law function of time for RM) of small-scale perturbations, and end in a fully turbulent mixing process. Shock tube experiments allow us to explore the effects of Mach number and initial conditions on unsteady variable-density mixing. I will describe here the results from recent experiments which quantifies the effect of initial conditions on the transition to turbulence in RMI driven flows The evolving density and velocity fields are measured simultaneously using high spatial resolution planar laser-induced fluorescence (PLIF) and particle image velocimetry (PIV) techniques. For the first time, we have acquired simultaneous PIV-PLIF measurements at 60 KHz in such a transient flow system.  Density, velocity, and density–velocity cross-statistics are calculated using ensemble averaging to investigate the effects of additional modes on the mixing and turbulence quantities. The density and velocity data show that a distinct memory of the initial conditions is maintained in the flow before interaction with reshock.

Biography: Devesh Ranjan is an Associate Chair for Research and J. Erskine Love Jr. Associate Professor in the Woodruff School of Mechanical Engineering at Georgia Tech. He was previously a director’s research fellow at Los Alamos National Laboratory (2008) and Morris E Foster Assistant Professor in the Mechanical Engineering department at Texas A&M University (2009-2014). He earned a bachelor’s degree from the NIT-Trichy (India) in 2003, and master’s and Ph.D. degrees from the UW-Madison in 2005 and 2007 respectively, all in mechanical engineering. His research program focuses on the shock-driven mixing and combustion, the physics of hydrodynamic instabilities, and advanced power conversion cycles. He is a recipient of National Science Foundation CAREER Award, US AFOSR Young Investigator Award and the DOE-Early Career Award. He is currently an Associate Editor of ASME Journal of Fluids Engineering and serves on the Editorial board of Shock Waves (Publisher-Springer & Verlag).