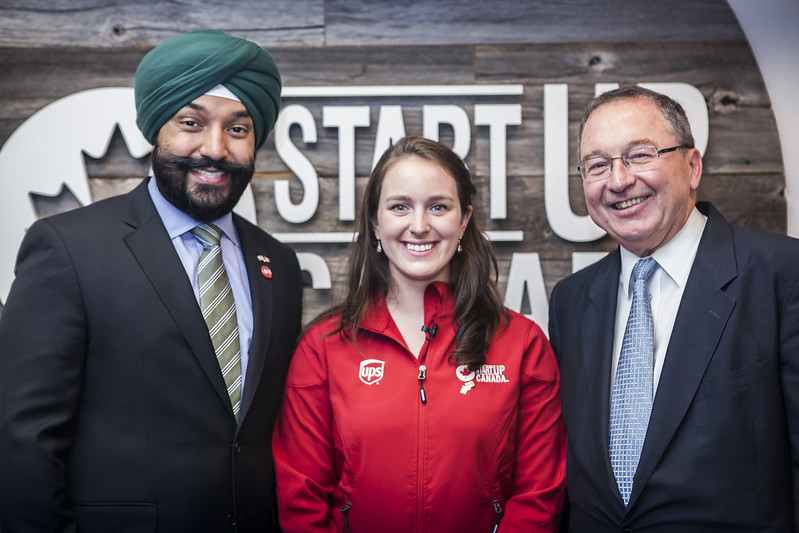 Andrea Palmer-Boroski, who graduated from UBC Mechanical Engineering in 2015, has won Startup Canada’s Young Entrepreneur Award for the region of British Columbia and the North.

The Startup Canada Awards, now in their third year, aim to “celebrate and recognize those driving impact and demonstrating excellence in Canada’s entrepreneurship and innovation community.”

Palmer-Boroski has also won the Canadian arm of Start Tel Aviv, a global startup competition presented in Canada by Startup Canada and the Embassy of Israel. Each of the 31 participating countries selected its top female technology-based-startup founder under 40 years old to represent her nation in Israel.

Along with the other winners, Palmer-Boroski will travel to Tel Aviv to participate in lectures, workshops and meetings with leading Israeli investors and professionals and to attend the DLD Tel Aviv Innovation Festival, an international gathering of companies, entrepreneurs, investors, techies, scientists and others. Tel Aviv has one of the best startup ecosystems in the world, according to a 2015 report by Compass, a San Francisco-based company that provides benchmarking software to startups.

Palmer-Boroski is the CEO and founder of Awake Labs, whose first product, called Reveal, is a wearable band that measures and tracks physiological signals for anxiety. When these signals (heart rate, skin temperature and electrodermal activity) indicate that the wearer is becoming anxious, Reveal sends out an alert through its accompanying app–thereby giving the parents of a child with autism, for instance, an opportunity to prevent problem behaviors such as meltdowns.

The device also lets users tag physiological data with contextual information, which may help people better understand what triggers anxiety in themselves or others. This could be particularly beneficial for non-verbal children with autism.

Reveal was conceived in January 2015, in an undergraduate entrepreneurship course at UBC. Palmer-Boroski and her team originally envisioned their device being used by stressed workers to avoid burnout before they saw its potential value within the autism community.

Since then, Palmer-Boroski has received numerous awards for her work, including first place at the 2015 Canadian Global Impact Competition, which sought to recognize an idea that would “improve the standard of living for one million Canadians within the next three to five years through the use of technology,” and both the 2016 Satchu Prize and the 2016 Outstanding Venture Award from The Next 36, an annual development program for 36 exceptionally promising young Canadian entrepreneurs.

Startup Canada is a national, non-profit organization that works to improve the environment for entrepreneur-run businesses in Canada. Of the 2016 award-winners, Startup Canada CEO Victoria Lennox stated, “As leaders in the entrepreneurship ecosystem, they are each making Canada a better place to start and scale companies.”

Based in Vancouver, Awake Labs has eight employees and is currently testing Reveal with families in B.C. Although at this stage the device is being designed for children with autism, Palmer-Boroski sees later versions of Reveal being used by individuals of all ages with anxiety-related disorders and dementia.

The Startup Canada Awards reception for B.C. and the North is scheduled to be held on October 24 at the Scotiabank Dance Centre (Faris Room, 677 Davie Street, Vancouver, British Columbia, V6B 2G6). Start Tel Aviv will take place from September 25 to 29.