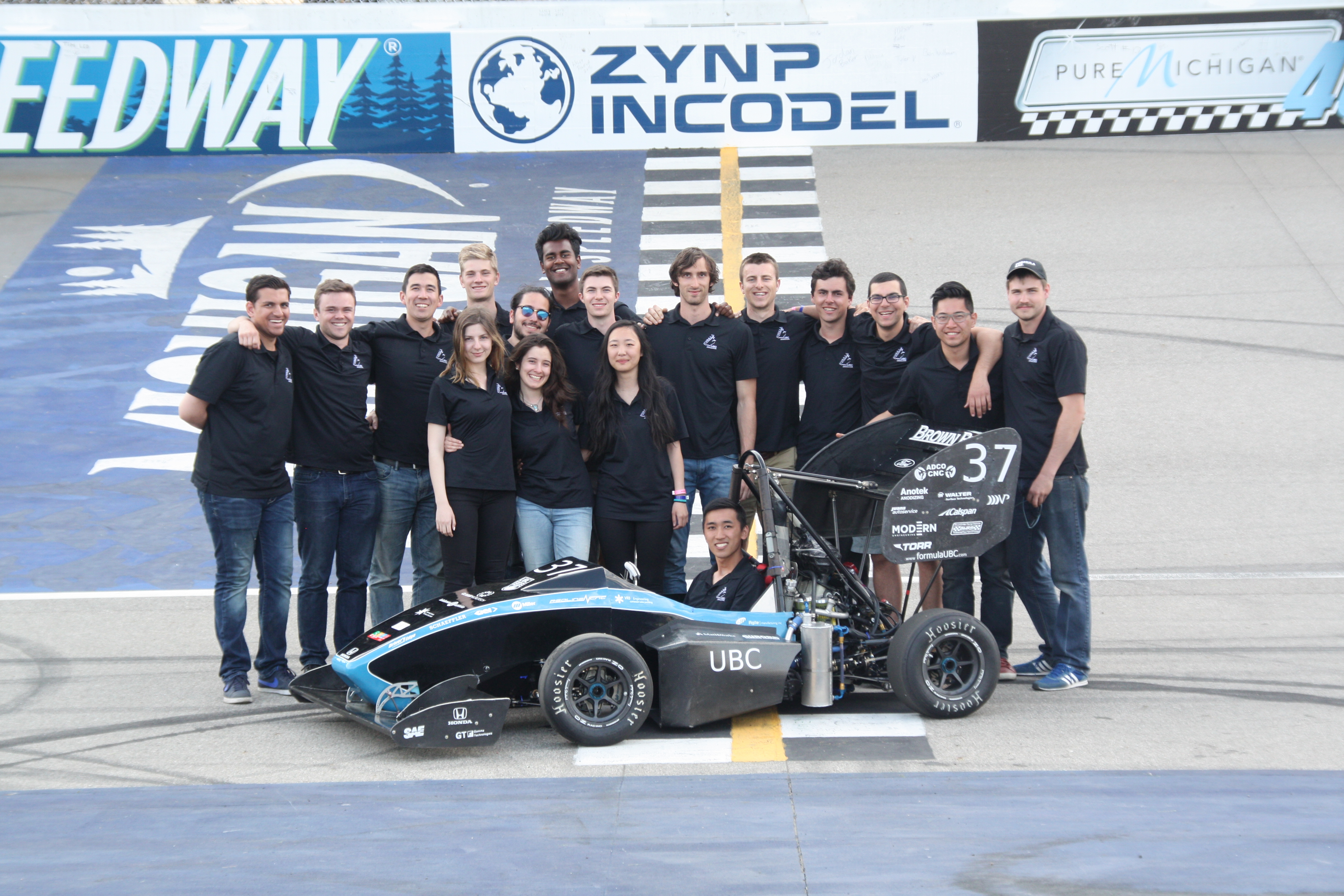 In May, the Formula UBC Racing team participated in the Formula SAE Michigan competition. The team secured 23rd place overall out of 120 teams.

The design goals for the 2017 competing race car included a drastic weight reduction which lead to a full redesign of the car’s primary sub-systems. Changes included a smaller chassis and a switch from 13” to 10” wheels. An incredible 70 lbs was removed from the previous year’s design resulting in a final weight of 447 lbs (without the driver). An example of the weight-cutting technologies implemented to aid in this aggressive weight target was the development of carbon fiber suspension components, which required extensive physical testing to validate strength.

Formula SAE competitions are comprised of both static and dynamic events. The static events include the engineering design presentation, the business presentation, and the cost event, in which the team placed 18th, 65th, and 91st, respectively. Dynamic results were as follows: 15th in acceleration, 22nd for skid pads, 23rd in autocross, and 30th for endurance. The team also placed 1st for their engineering drawings, which awarded them the Three View Drawing Excellence award for the second year in a row.

Due to a lack of time for suspension adjustments and practice, drivers had difficulty completing their autocross runs cleanly and with competitive times. Nearing the end of the event, the second driver took a more conservative driving style and ran a fast lap earning the team 23rd in the autocross event.

The team started the endurance race strong due to diligent preparation and tuning that took place before the event. Unfortunately, however, due to an overheating engine, it became necessary for the driver to slow down to preserve engine life. After 11km of racing and a successful driver change, the front brake rotors shattered due to the second driver’s continuous hard braking. The driver pushed through the race with only the rear brakes while still managing to finish 30th overall.

In the end, Formula UBC secured 23rd place at the Formula SAE competition in Michigan. The success was attributed to the innovative design concepts and quick problem-solving skills exhibited by the drivers and team members. The team plans to address the issues faced during the endurance race to reach their goal of finishing top 20 at next year’s Michigan competition.

The team would like to thank all the sponsors and supporters for such a successful year. The project could not be possible without them.