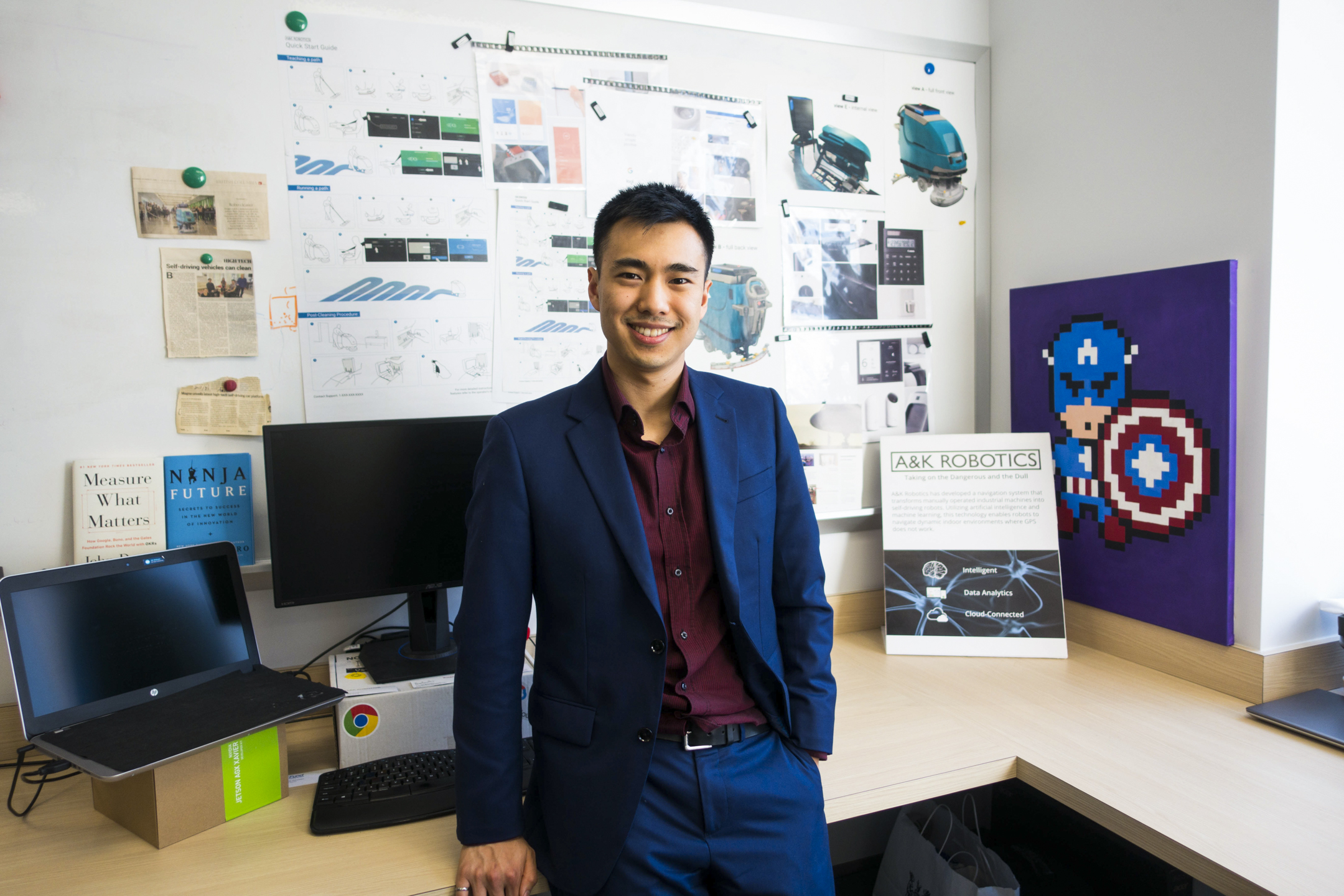 Long before A&K Robotics brought autonomous floor-cleaning robots to the UBC Vancouver campus, Mechanical Engineering alumnus Anson Kung knew he wanted to start a business. He turned his combination of technical training and personal initiative into success by founding the innovative robotics company with UBC alumni Matthew Anderson and Jessica Yip, but his path to entrepreneurship was far from smooth. Forging one’s own path comes with risks as well as rewards, and Kung has approached experiences good and bad as part of his education, gaining learning and experience from two previous ventures alongside using UBC’s resources for new entrepreneurs on his journey towards a new business in robotics.

Making the Most of UBC Resources

With an interest in micro-controllers and programming, Kung took the Mechatronics Option in his undergraduate degree to explore his interest in the integration of electronics and machines. However, experiences outside of the classroom are what brought him to entrepreneurship.

As an Engineering Co-op student, Kung learned what he wanted from a workplace: that a traditional nine-to-five was not for him. Switching to the entrepreneurial Co-op option, he explored a business idea of his own and experienced parts of a business beyond product design. After designing a hand-held camera stabilizer, he used his new skills in marketing, creating financial forecasts, and setting up distribution and manufacturing partners to embark on his first venture, filing his first patent at age twenty-one. While this business didn’t work out, he gained valuable insights and subsequently opened “Quadcopter Universe” (BC’s only online drone store at the time) to continue his experiment in entrepreneurship while studying.

Still in school, Kung wanted to connect with partners who could help him make something bigger than Quadcopter Universe. Entrepreneurship@UBC (or e@UBC) provides resources to UBC students, faculty, staff and alumni within five years of graduation. When Kung walked through the doors he got the advice that prepared him to go to events like Startup Weekend Vancouver and talk to people – how he connected with A&K’s other co-founders. After his graduation, Anderson, Yip and Kung entered e@UBC’s Lean Launchpad program in order transform their idea into a fledgling business. Eventually their hardware needs brought them to HATCH, UBC’s tech incubator run by ICICS, Sauder, and e@UBC. HATCH provided them with office space, but also the maker space – a facility with tools and a 3D Printer which allowed them to do some basic prototyping. After growing too big for HATCH, they were ready to open the downtown office they currently call home. This trajectory meant that Kung went seamlessly from his degree into a business he had helped create. He says that if he hadn’t followed that path, he would have gone into the New Venture Design program offered by Sauder and Applied Science, which teams up students from different disciplines to design a business.

Startups are common in a tech hub like Vancouver, but what made robots the technology that Kung, Anderson and Yip wanted to focus on? The three agreed that robots would be the next thing to change the world, as the union between the online and the physical. Robotics is also a field sitting on the edge of a specific technological challenge that has hampered its expansion outside the manufacturing plant – indoor navigation. Focusing on solving this fundamental puzzle, the cleaning industry provided an opportunity to utilize A&K’s development of a navigation system to complete a nearly-universal task, and move their business forward rapidly. Integrating their intelligent system with existing human-run floor cleaning machines allowed them to create a functional and useful product quickly, which are now in use not only at UBC but at Vancouver International Airport as well. A&K Robotics’ next endeavor is to find a robotic solution to help people with mobility needs get around airports.

A&K Robotics has hired a number of UBC graduates, and when asked for what he looks for in a prospective employee, Kung wants to hire people who are excited to dig into their personal projects, balancing academic performance with the aptitude and excitement for engineering – “you’re building things all the time, you’re on student teams, you have side projects at home, you’re always doing something related to engineering because it’s something you enjoy!” Kung also underlined the importance of personal responsibility to an entrepreneurial mindset:

It’s really important to make decisions for yourself and own them…[i]t’s really important to talk to as many people as you can, and get their feedback, and try to learn what they’ve done, but ultimately you’re responsible for yourself, and I think for most of the decisions in my life where I look back and feel like ‘this was a really good decision and I’m really glad I took it,’ those are decisions where conventional wisdom suggested otherwise. But after weighing all the facts and carefully looking at it, I believe I made the right decisions each time, and entrepreneurship is one of them.

It’s this sense of initiative and desire to grow – the understanding that it’s up to students to push their own futures forward – that Kung encourages students to cultivate in their pursuit of entrepreneurial success.